The Calgary Hitmen are a major junior ice hockey team based in Calgary, Alberta, Canada. The Hitmen play in the Central Division of the Western Hockey League (WHL). They play their home games at the Scotiabank Saddledome. Bret "The Hitman" Hart, a local-born professional wrestler, was a founding owner as well as the inspiration for the team's name. Established in 1994, the team has been owned by the Calgary Flames hockey club since 1997. They are the third WHL team to represent Calgary, preceded by the Centennials and Wranglers.
The Hitmen have finished with the best record in the WHL four times, and qualified for the playoffs for thirteen consecutive seasons between 1998 and 2010. In 1999, they became the first Calgary team to win the President's Cup as league champions, and the first to represent the city in the Memorial Cup since the Calgary Canadians won the national junior title in 1926. The Hitmen hold numerous WHL attendance records, and in 2004–05 became the first team in Canadian Hockey League history to average 10,000 fans per game. Thirty-nine former Hitmen players have gone on to play in the National Hockey League.

The Calgary Flames are a professional ice hockey team based in Calgary. The Flames compete in the National Hockey League (NHL) as a member of the Pacific Division of the Western Conference. The club is the third major professional ice hockey team to represent the city of Calgary, following the Calgary Tigers (1921–1927) and Calgary Cowboys (1975–1977). The Flames are one of two NHL franchises in Alberta; the other is the Edmonton Oilers. The cities' proximity has led to a rivalry known as the "Battle of Alberta".
The Flames have won two Presidents' Trophies as the NHL's top regular season team, and have claimed seven division championships. Individually, Jarome Iginla is the franchise leader in games played, goals and points and is a two-time winner of the Maurice "Rocket" Richard Trophy as the NHL's leading goal scorer. Miikka Kiprusoff has the most wins by a goaltender in a Calgary Flames uniform. Eleven people associated with the Flames have been inducted into the Hockey Hall of Fame. 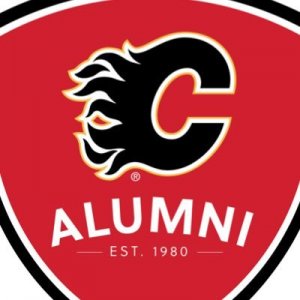 The Calgary Flames Alumni, founded in 1993, is one of the oldest Alumni chapters in professional hockey. We are here to help those in need and have raised hundreds of thousands of dollars for charity. There are currently more than 150 Alumni who have decided to call Calgary home. This includes both Calgary Flames Alumni as well as alumni from various NHL teams around the league. Interested in having a member of the Calgary Flames Alumni at your event? Interested in Corporate Partnerships, Marketing & Advertising opportunities? Please use the following contact form to let us know about your event and inquire about potential rates!

Why Do We Advertise Community Events, Attractions?

Data is supplied by Pillar 9™ MLS® System. Pillar 9™ is the owner of the copyright in its MLS® System. Data is deemed reliable but is not guaranteed accurate by Pillar 9™. The trademarks MLS®, Multiple Listing Service® and the associated logos are owned by The Canadian Real Estate Association (CREA) and identify the quality of services provided by real estate professionals who are members of CREA. Used under license